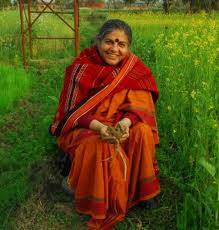 In June 2012, movements and leaders will meet in Rio for Rio+20, two decades after the Earth Summit was organised in 1992 to address urgent ecological challenges such as species extinction, biodiversity erosion and climate change. The Earth Summit gave us two very significant international environmental laws: the United Nations Convention on Biological Diversity and the United Nations framework Convention on Climate Change. It also gave us the Rio principles, including the Precautionary Principle and the Polluter Pays Principle.
The world has changed radically since 1992, and sadly, not for the better. Ecological sustainability has been systematically sacrificed for a particular model of the economy, which is itself in crisis. 1995 created a tectonic shift in what values guide our decisions, and who makes the decisions. Rio was based on values of ecological sustainability, social justice and economic equity – across countries and within countries. It was shaped by ecological movements, ecological science and sovereign governments. The establishment of WTO, and the paradigm of global corporate rule, inaccurately called “free trade” (more accurately described as corporate globalisation) changed the values and the structures of governance and decision making.
Conservation of the Earth’s resources, and equitable sharing was replaced by greed and the grabbing and privatisation of resources. Sustainable economies and societies were replaced by non-sustainable production systems, and a relentless drive to spread the virus of consumerism. Decision making moved into the hands of global corporations, both directly and indirectly. It is therefore not surprising that when we meet at Rio+ 20, the ecological crisis is deeper than what it was at the time of the Earth Summit, and the will and capacity of governments is weaker.
“Instead of polluters paying and being regulated at the national and international level to stop pollution, the biggest atmospheric polluters who have contributed most to climate change are now laying the rules on how to deal with climate change.”
While the corporations wrote the rules of WTO and global free trade, they have also subverted the environmental rules which were supposed to regulate their commercial activities to ensure sustainability. They have mutated environmental laws which are supposed to regulate commerce into laws for commercialising and commodifying the earth’s resources and ecological functions.
Profiting from pollution
They have subverted the Climate Treaty and the Biodiversity Convention. Instead of polluters paying and being regulated at the national and international level to stop pollution, the biggest atmospheric polluters who have contributed most to climate change are now laying the rules on how to deal with climate change. The biotechnology industry which has caused genetic pollution by releasing genetically engineered organisms into the environment is making the rules on how to manage biodiversity and how to govern Biosafety. The attempt to introduce BRAI, the Biotechnology Regulatory Authority of India, is one example.
The original objective of the Climate Treaty was to put in place legally binding emission reduction targets for the historic polluters, who in the pre-globalisation period were concentrated in the rich industrial North. The treaty was destroyed at the Climate summit in Copenhagen, by an attempt to replace it with a non binding Copenhagen Accord. The Kyoto Protocol introduced emissions trading, which in effect meant the polluter got paid, not punished. The big industrial polluters were first paid by allowing them to get private rights to our atmospheric commons. They then got paid by profiting from carbon trading.
Profits increased and emissions increased. Climate chaos is worse today than it was in 1992. And the polluters look for new avenues to make money and grab resources. Now they want to commodify the ecological functions and services that nature provides. This will be the big Climate debate in Rio+20.
“None of us are immune to the crisis, or the response to it. None of us are bystanders. we are all immersed in the processes that are either threatening the planet and our own future or finding creative ways to shape a sustainable and just future.”
The original objective of the Convention on Biological Diversity was the conservation of biodiversity and its sustainable and equitable use. This objective has been subverted and is being increasingly replaced by objectives of trade in genetic resources, profits and privatisation. The Nagoya Protocol on Access and Benefit Sharing restricts access only to global players, ignoring the access of local communities. It treats as utilisation only utilisation for research and commerce – ignoring the survival needs of local communities. It is in fact legalised Biopiracy, because it enables the transfer of genetic wealth from local communities to global corporations, it undermines the biodiversity economies and cultures which have conserved biodiversity, and are necessary for conserving it for the future.
‘We know we can change it’
In both the Climate Treaty and the Biodiversity convention, trade and commerce is replacing conservation and the commons. Rights of Corporations is replacing the Rights of Nature and People.
And this change in values, from conserving and sharing to exploiting and privatising, is justified in the name of economic progress and economic growth. Yet the economic paradigm for which the Earth and Society are being pillaged and destroyed, is itself in deep crisis. Look at the farmers suicides and hunger and malnutrition crisis in India. Look at the protests in Greece, Spain or the Occupy movement of the 99% in the US.
As the Spanish indignados said:
“We fail to understand why we should have to pay the costs of the crisis, while its instigators continue to post record profits. We’re sick and tired of one injustice after another. We want human dignity back again. This isn’t the kind of world we want to live in, and it’s we who have to decide what world we do want. We know we can change it, and we’re having a great time going about it.”

A paradigm shift is desperately needed. And it will not come those who have created the crisis, and who are looking for new ways to extend the life of the Greed economy by commodifying and privatising all life on earth. They will come to Rio+20 to paint the Greed Economy Green, and call it the Green Economy. And they will have powerful governments on their side.
Movements for ecological sustainability, social justice and deep democracy will come to Rio+20 with another paradigm, one centred on the Rights of Mother Earth, the rights of future generations, of women, indigenous communities and farmers.
It is this epic contest between a destructive and dying outmoded paradigm and a life enhancing emergent paradigm that will be the most significant aspect of Rio+20. The outcome of this contest will determine the future of humanity. It will not enter the negotiations, which can only be the lowest common denominator in the current context of corporate influence. But it will provide the energy for the People’s Summit, and many government initiatives at Rio Centro. This contest will continue beyond Rio, in every country, in every village and town, every farm and workplace, every home and street.
None of us are immune to the crisis, or the response to it. None of us are bystanders. We are all immersed in processes that are either threatening the planet and our own future, or finding creative ways to shape a sustainable and just future. Every day is an earth summit in our lives. And each of us is negotiating our collective fate on the earth.