Could cows and sheep halt climate change and tackle rural poverty? | IDEAA IT 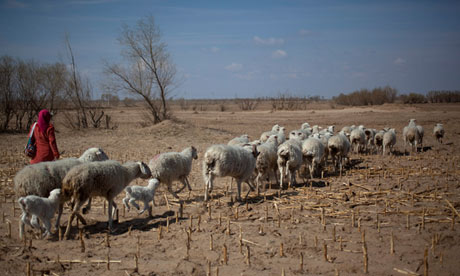 A herder leads her sheep in search of grazing grounds in Inner Mongolia, which is fighting severe desertification. Photograph: How Hwee Young/EPA

Agriculture is destructive, but doesn’t have to be. Livestock could help tackle climate change, desertification and rural poverty

Holistic management, with its counterintuitive claim that more, rather than fewer, cattle can improve the land, has been around for decades – a kind of perennial cattleman’s quarrel, and a thorn in the hide of ranchers and anti-ranchers alike.

The use of livestock as a tool for restoration has been scoffed at by scientists, reviled by vegetarians and those who blame cows for climate change, and a flashpoint for tension over how to conserve land in the American West.

But that was before Allan Savory, who developed holistic management, won the 2010 Buckminster Fuller Challenge for a programme with “significant potential to solve one of humanity’s most pressing problems.” And before governmental agencies such as USAID and large NGOs like the Nature Conservancy teamed up with the Savory Institute on international projects after seeing the benefits on the ground. And, in an era when one viral video makes the difference between anonymity and renown, before Savory’s TED talk, How to Green the Desert and Reverse Climate Change, flew round the Internet with some 2m views.

At the end of June, I attended the first Savory Institute International Conference, Transforming Landscapes for Global Impact, in Boulder, Colorado. This two-day event, attended by 300 ranchers, scholars and investors from around the world, showed that holistic management is now launched as a global movement – one that’s positioned itself as a vehicle for addressing seemingly intractable problems of climate change, desertification, and rural poverty.

The impetus is to bolster the deployment of holistic planned grazing to revive the grasslands of the world. Grasslands, also known as prairie, savanna, steppes or pampas, represent 40% of the world’s land surface. Much of this land is desertifying, or losing the capacity to sustain life; more than 10m hectares of productive land succumb to desertification every year.

Since I began exploring soil as a crucible for our many overlapping ecological and economic crises – and for solutions – I’ve been intrigued by holistic management’s use of the humble cow, sheep, goat or, more exotically, camel or yak to remake the land. The results are most dramatic on “brittle” landscapes, that are dry much of the year and need to sustain moisture from one rainy season to the next.

Savory’s insight is that grasslands and ungulates evolved together, so that the land needs animals in the same way that animals need the land. All domestic animals have an impact on land; this impact can be positive or negative, depending on how they are managed. Land can be overgrazed but it can also be undergrazed, meaning that it suffers from lack of animal impact.

This notion surprises many people, who assume that leaving land alone is always better. But when, say, cattle are moved in a planned way, their behaviour kickstarts key biological processes that might have stalled, a situation that could lead to desertification.

Specifically, their nibbling exposes the plant’s growth points to sunlight, their hooves break apart capped earth and aerate the soil, their trampling presses seeds into the soil profile (enhancing plant diversity) and decaying grasses into the ground (enabling them to be turned into organic matter by soil microorganisms), and their waste adds nutrients to the soil. All of which builds soil carbon, and with that the land’s water-holding capacity. The result is greater biodiversity below and above ground, improved fertility, and a boost in ecological resilience – as holistic planned grazing practitioners proudly demonstrate through multiple before-and-after shots and fence-line comparisons. And it’s all done with cows.

The meat (pardon the pun) of the gathering was the introduction of global Savory Hubs, a network of locally-led groups practicing holistic management in their respective environments. The Savory Institute, which offers training, monitoring tools, and funding sources, has set a goal of establishing 100 Hubs, influencing 1bn hectares of grasslands across the continents by 2025.

Twelve fledgling hubs presented, vying to join the inaugural herd. Their programmes highlighted the variety of entrepreneurial ways holistic management is being applied in the real world:

• Pablo Borrelli, manager of Ovis XXI, a consortium of sheep herders in the Patagonia region and a certified B corporation, said his company has joined with Patagonia Clothing and the Nature Conservancy to create the Six Million Hectare Campaign. Borrelli says: “We are seeing grasses come back and thrive, something we would not have dreamed of 20 years ago.”

• Rolf Pretorius, Chairman of the South Africa-based Olive Leaf Foundation, described an evolving partnership with an agricultural college in the Eastern Cape. “There’s an ageing rural population, and 20% of children live in orphan-led families,” he said. The idea is for youth to learn techniques to reverse land degradation and that would lead to employment. “You can’t do conservation without looking at the social context,” he says.

• Durukan Dudu of Turkey says the Anatolian hub’s emphasis is bringing young urbanites to work on ranching land, 30m hectares of which is held in commons. He says: “We want to create an example and vivid network for not only Turkey, where livestock is almost dead, but also for the Balkans and Middle East countries where dozens [of] millions of hectares of grazeland are just… dying.”

It’s time to make the shift

Allan Savory, who splits his time between his native Zimbabwe and the US and is now in his late 70s, began the conference with the statement, “Agriculture is the most destructive industry that we have. More than coal mining and other extractive industries.” But it doesn’t have to be this way. The over-arching message of that gathering was that while man’s attempt to wring value from the earth, including the raising and running of livestock, have left scars on the landscape, if done well it can be a source of healing. And that the time to make the shift is now.

Judith D. Schwartz, of Vermont, USA, is author of Cows Save the Planet and Other Improbable Ways of Restoring Soil to Heal the Earth.

This content is brought to you by Guardian Professional. Become GSB member to get more stories like this direct to your inbox